Finian is definitely a smart guy.

He learned shake immediately. All I have to do is put my hand near him now and he lifts his paw. And waits for a treat.

And when I pick up the spray bottle to counter his whining, he ducks his head, lowers his eyelids. He knows he can’t avoid getting hit if I push the trigger, but the abused look in his face might just be enough to stop me in my tracks. It usually is.

But in spite of this, I just started to wonder if something was missing up there.

We were on one of our slow walks. The ones where we amble along at a 1 mph pace, stopping to smell every rock and dead worm along the way.

Then, there it was. I saw it first. A leaf, suspended as if floating. Spinning in the air, attached, invisibly but firmly, to the end of a broken spider web.

Finian saw it too. He turned from the stray cat hair that had his attention. He spied the leaf. And bit it.

Surprisingly, and unlike all other leaves, it bounced away.

So he bit it again. This time it flew back behind him. In the dusk of a summer night, impossible to see where it went. He looked around. And around (in the entirely wrong direction). I watched it twirling just behind his head.

And then, he found it! Bit for it. This time, it appeared he had it. He sat down with it in his mouth, triumphant.

Until it flew off again.

This only went on for five minutes. Because that was when I decided it was time to move on a few feet.

So I started to wonder: maybe, his genius in some areas notwithstanding, maybe something was missing.

It was the same with his foodball. Every day, twice a day, he batted at it, ecstatic at every nugget that came out. No trying different techniques. No change in emotion from start to finish. No frustration at the times no food came out. No higher excitement when five nuggets fell out at once.

“Look, he stops when there’s nothing left in the ball. He’s smart. He knows.” My boyfriend had a higher view of his talents than I did.

So I showed him the leaf biting incident, on iphone video. I thought that would prove it.

“Maybe he’s not trying to eat the leaf. Maybe he wants something else.”

Not for the goal?

“Like when he bites my foot. He just lets it go when he gets it, so he can jump for it again.”

You mean just for fun?

I don’t write without someplace to put it. However long that may take. Or spend time running, meditating, showering, sleeping, just about anything, without some result in mind.

Finian it seems is just the opposite.  If I take him running in the park at 6am, he lags behind, walking dutifully fast but never running.  Why are we doing this? This is not fun. Until he sees that duck up ahead. Now we are having fun.

There is nothing fun about a bath. Who needs to get clean? And to relax? There are a million better ways to relax than that.

And the point of sleeping? No point. But after a hard day at daycare, just awesome.

Maybe he’s not missing anything. Maybe it’s me. Yet again. 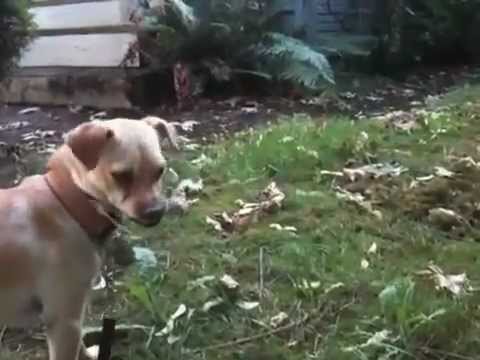